My life is my message 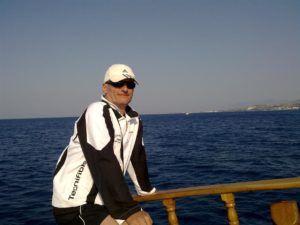 Born in 1961, Boyan Gorenc is an Author, business man, guide and tennis coach. He has spent most of his life seeking and exploring the Truth, dissatisfied with the life offered by the local tradition and environment. This is what led him to India in 1982. During the years to come, he was influenced by many spiritual teachers until the winding and unorthodox spiritual development path brought him to Sathya Sai Baba, whose teachings can be summed up in a single sentence which reads: “My life is my message.”

Some of those encounters and experiences with Sai Baba and the way they helped him turn his life around in a positive way were described in his first book entitled Sai Baba – Myth or Reality?. Whenever the opportunity presented itself, he would travel to India, to his Teacher, where he took others as well, helping them to find their own path. He is a co-founder of the Sai Centre in Slovenia, which he led between 1994 and 1997.

His second book, Sai Baba and the Religion of Love, delves into the stories of followers of various religions whose lives had also been changed by Sai Baba and also demonstrates the basic message of Baba’s teachings that what ultimately counts is Love and not the religion one follows.

Boyan is independent and not connected to any organisation or movement. His goal is to convey practical and useful ideas and information that would help promote transformation of the individual. Nowadays, he runs spiritual programmes to India which he has visited a whopping 70 times, prepares lectures and Workshops and passes on old Indian wisdom to us, often too orientated into the material aspect of life. More recently, he has contributed to the development of Information Therapy and Zen Tennis.

I have always felt compelled to support others in their quest to transform into better and happier individuals at least to some extent. I have never experienced anything more fulfilling than seeing people change with my own eyes, whether during my India programmes or Workshops that I used to lead. The same has also occurred with Information Therapy and Zen Tennis lessons. We all reach a point in our lives from time to time when we simply need someone to tell us something we might already know or have an inkling for within but have failed to bring it all into practice. As the saying goes: “Information without transformation is pointless.“This is what led to the principle and slogan Information 4 Transformation.